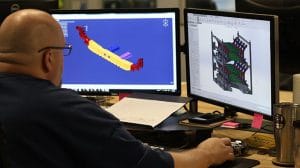 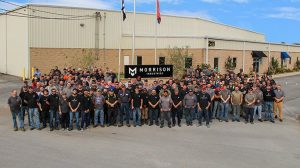 Morrison Industries of 211 Progress Blvd. in the Mountain View Industrial Park reports gain in market share brought about as a result of its new northern plant in Novi, Mich., just outside of Detroit.

The Novi plant has allowed the firm to begin doing business with Ford for the first time, a relationship that is expected to increase significantly. The Novi plant opened in November 2017 with operations beginning during the first quarter of 2018. Today, the company has a total of 250 employees supporting about $25 million in sales revenues. There are 192 hourly people at Morrison and 30 at Novi. The remaining 28 employees are salaried with most being in Morrison.

Morrison Industries is in the business of transporting parts. The company designs and manufactures customized shipping containers, primarily for the automotive industry. Its top five customers are: Toyota, FCA (Chrysler), GMC, Nissan and Ford.

The company has a new website, www.morrisonindustries.com. On this site there is a career section that can be clicked on to access a posting of available jobs (www.morrisonindustries.com/career) and the online forms to apply. The company also welcomes applicants who come on-site. Morrison Industries advertises available jobs on its website, Facebook, Linkedin, newspapers, and via radio.

The company was founded by Ron and Renee Wilson. They have been fully retired for eight years. Their son, Jacob, is the current president and CEO. The company is privately owned by the Wilson family. Current executive staff members reporting to Jacob are: Keri Martin – VP of HR, Chasity Keith – VP of Finance, Hunter Burney – VP of Operations, Blake Oakley – VP of Accounts & Engineering and Jacqueline Bill – GM of North Operations (Novi).

Added to management over the last three months have been a production control manager, human resources assistant, and staff accountant in Morrison and product design engineer – project manager in Novi. In addition, an existing employee moved into a new marketing manager position. That led to the new website, expansion in advertising in multi-media, and the plan to create an outside sales force during 2019 for the first time.

Given the custom nature of their business, there are limited competitors. I asked what are the main competitive strengths of Morrison Industries?

At the top of the list is the capability of designing and producing 300+ shipping racks a day (using both plants). The company operates with the philosophy of emphasizing customer service to the point of offering “ridiculous customer service.”

The nature of the automotive market is being chaos driven. Morrison Industries tries to create order out of chaos. That is their employee pledge to their customers. Morrison is very vertically integrated, having invested in capital over the years to have in-house what is needed for product manufacturing.

More recent examples include high-definition plasma cutting, upgraded automatic bandsaws, a new powder coat paint line in Novi, and brought their Accu-Router back into production of UHMW parts. Investment in welding robots is expected in the future, especially as supported with the new Motlow Robotics Center. This vertical integration is another customer benefit, one-source manufacturing. The merchandising theme for the company is “We’ve got your back.”

Morrison Industries is constantly looking to diversify its product offering. During 2018, metallic cable reels were added to the product list. They added CMM (coordinate measurement machine) capability for robotically loaded shipping racks. They have made robotically loaded racks for a long time, but the ability to CMM these is a plus to their customers.

Looking to the future, Morrison Industries anticipates the automotive industry is moving from sedans/ cars to SUVs and trucks. This movement has already started and has been announced by multiple builders. Then the advent of electric, self-driving vehicles will impact the industry in ever-increasing ways.

Morrison Industries is poised to take advantage of market changes and growth thereof. This company is “home grown.” The firm started in Warren County and is still headquartered here.

BRAC congratulates the Wilson family – their investment and commitment to our county. We hope for more market share advances in the future.

© 2018 Morrison Industries (Don't steal our content, unless you really need it!)